The Arrowsmith Tennis Club is a Vancouver Island community club whose members come from the Oceanside area - Nanoose Bay, Parksville, Qualicum Beach, Bowser - and beyond. The membership consists of all age groups including juniors (see under Juniors), but is weighted towards the retirement age. Court conditions permitting, play takes place all twelve months of the year. Of course, the weather often puts a damper (quite literally) on things in the winter, but depending on the year there are often quite a few days when the weather is good enough for outdoor tennis even in January. (The picture above on the right was taken in early January 2017 at 2 deg, the one on the left in early April 2017.)

The Club is fortunate in being able to use five of the six excellent community courts behind the Springwood School in Parksville and two of the three scenically situated courts on Veterans Way in Qualicum Beach. The times at which the Club has courts reserved in both Parksville and Qualicum Beach are listed under the Schedule tab. Play at these times is on a drop-in basis and tends to be doubles. In the evening, play is either singles or doubles.

During the summer season, in addition to the daily drop-in tennis, the Club organizes a number of social events, Round Robins and tournaments for singles, doubles, and mixed doubles. At all times of the year, the Club offers online reservations for some courts and use of the Club equipment like ball machines and squeegees (to remove rain water)..

The Arrowsmith Tennis Club welcomes players of all ages and abilities. If you want to try out the Club, you can play twice for free. After that, you are expected to join the Club and pay the annual membership fee.

To join the Arrowsmith Tennis Club, fill out the membership application form and give the completed form to Lis Bang (Membership Director, ph: 250-752-5065) or David Fraser (Treasurer, ph: 250-644-4276) or mail it to the Club's post office address given below. You can download the membership application form by clicking HERE. (The form will be displayed in a separate window. The controls needed to download the form will pop up when you move the mouse to the bottom of the new window.)

The annual club membership fees are $35 for adults and $20 for juniors (under 18 years of age) and $70 for families (parents and any number of children under 18). Members receive a Club shoe tag, which allows them to play at the times reserved for our Club. (See Schedule.) Of course, they can play at any other times as well when courts are available.

You can also pay the Club fee via e-transfer. For instructions on how to do this, click HERE.

We look forward to seeing you on the courts!

or write to the Club's email address: arrowsmithtennis@hotmail.com

All members should show courtesy and consideration while on and off the courts. Click HERE for details.

The Code is a guide to fair play and the unwritten rules of tennis. Click HERE for some interesting reading.

behind (to the west of) Springwood School, 450 Despard Ave., Parksville

You are encouraged to sign up if you plan to play on a given day to let others know who is coming on that day. This is especially important if the playing conditions are 'iffy'. It is also important to cancel if you are not coming so that others are not given misleading information. To sign up (or cancel), click HERE.

If you sign up, you must be on your court punctually at 1:00 pm to be able to claim your spot.

Players who have signed up will arrange themselves in the order in which they are listed on the sign-up page. However, if court cleaning is necessary before play can begin, people who did the cleaning will have priority in filling court positions.

Players who have not signed up will use any of the places remaining and will participate in the play at 1:00 or, if they drop in later, will be folded in at the end of each 40-min session.

The Singles Ladder is available also in the winter. All Club members are welcome to participate. To view the ladder, click HERE.

At this time no Junior Program is offered in 2022.

However, Juniors may participate in the Club's other regularly scheduled tennis activities as listed on the website under Schedule.

Entries must be submitted by email or telephone up to noon Thursday, August 18 to:

Fee collection: David Fraser is available to collect fees at the courts

Most of our members are now being contacted by email. Please contact Hans Laue at arrowsmithtennis@hotmail.com if you have email and are not being contacted in this way or if you are changing your email.

You can also contact Hans about any other Club matters by using the email address above.

Throughout the year, but especially in the fall, leaves and needles need to be cleaned off the courts. The Club is assisting the City in this task and is asking for volunteers who together with others will help maintain the courts in good condition. Paul Arnell (email) will coordinate the activity. To sign up for a two-week period, click HERE.

A leaf blower, brooms, garbage can, and squeegees are available in the Storage Room at courtside. Ask a member of the Executive for the key combination.

Sue Wilson is our Sunshine Person. Ph: 250-248-7280. Please let Sue know if someone is ill or if there is a bereavement in the family, so she can send a card.

John Suttie, an experienced racquet stringer and member of our Club, will string your racquet. You can contact him at 250.951.5696 or jdsuttie@gmail.com.

Alan Oslie (p:250-951-7520, e:Alantennis@shaw.ca) is a member of our Club with experience in coaching juniors and adults. He is available for private and small group lessons, including to players or beginners who are not members of the Club, at times to be mutually agreed. Give him a call.

Ball Machines. The Club has two Silent Partner - Edge Star ball machines which are available to all members (juniors only with supervision of an adult member). Members must have received instruction on how to use the machines before using it for the first time. Contact Paul Arnell at 250-729-1271 for instruction. For information about the machines, click User's Manual.

The Springwood School parking lot must NOT be used by tennis players during school hours.

1975 - The Qualicum Beach Tennis Courts were built. Louise Dwyer was on the Recreation Commission and instrumental in pulling together the funding by means of a of 1/3 Town, 1/3 Rotary, and 1/3 Provincial grant.

1983 - The Arrowsmith Tennis Club was formed with Fran Jones as the first president and Meep Verbrugge as a major organizational force. 66 members. The Club was based in Qualicum Beach with some play at Ballenas High School. There were a morning of ladies only, a fun day of mixed play, and a singles ladder. Some current members, Christine Aubin, Louise Dwyer, Jim Henderson, George Klimek, Stan Saunders, Rita Stevenson and Dorothy Watson, were among the original members of the Club.

1991 - President Judy Wood, 128 adults, 38 juniors. This was the first year in which there were tournaments for Club members only - juniors, adults, and seniors (over 55). These tournaments attracted many new members. The junior boys tournaments had under-14 and under-18 events and attracted 24 in singles and 14 pairs in doubles. There were singles and doubles ladders, regular round robins (at Beach Acres). New also was an "Open" junior tournament, with other clubs attending. The Club was incorporated.

1998 - President Glenn Simpson, 100 adults, 8 juniors. The Club contributed $34,550 toward the addition of three courts at Springwood in Parksville, with the proviso that the Club get preferential use of court time. The final round robin was played on the six Springwood courts October 18.

1999 - President Glenn Simpson, 93 adults, 8 juniors. The Club times of Tuesday, Thursday, Saturday and men's Sunday mornings were moved from Qualicum to Springwood and the fees raised from $20 to $25. (A few members preferred not to move and formed a Qualicum Club). The Qualicum Open became the Arrowsmith Open and moved to Springwood. The Mixed Team won the Mid-Island league. A second ladies team was entered in the Interclub league.

2003 - President Bob Urquhart, 120 adults, 21 juniors. A storage shed was built at Springwood at a cost of $4450. The website was developed to better publicize Club activities. The Ladies B Red Team won the Vancouver Island championship.

2004 - President Bob Urquhart, 128 adults, 18 juniors. Due to organizational difficulties, the Arrowsmith Open tournament was canceled, effective starting 2005. The Interclub mixed and ladies leagues too ceased due to the lack of an organizer. Future emphasis is being placed on tournaments for members only.

2011 - President Dave Chappell, 121 adult members. In Winter 2011, four indoor tennis sessions at the Westwood Club were arranged for 12 participants. A rebound net for practice hitting was installed against the fence on the north side of Court 2.

2012 - President Hans Laue, 123 adults, 1 junior. Westwood indoor play was again arranged in the winter months. Wind screens were added to the south fence. A new court allocation system for the Round Robins was introduced.

2013 - President Hans Laue, 122 adults, 19 juniors (the Club's Junior Program was restarted under Jill Trelawny), Westwood indoor winter tennis continuing, MWF 12-2 sessions restructured (for somewhat more challenging play with both men and ladies participating, starting punctually at noon with court changes every 40 min), online sign-up system introduced for the MWF 12-2 and the evening sessions, our ladies team won the 3.5 mid-Island Interclub League and placed second in the Miele Provincial Tournament, a squeegee that really works was acquired and a keypad lock installed on the locker room to give all members access to court cleaning equipment. In September 2013, the City installed new nets on Courts 4 and 6.

2014 - President Frank Johnston, 116 adults, 24 juniors (the Club's Junior Program continued under Jill Trelawny), Westwood indoor winter tennis continuing, the ladies' team again won the 3.5 mid-Island Interclub League and got to compete at the Miele Provincial Tournament held at Whistler, and a second of the good squeegees was acquired. Fees were raised from $25 to $35 for adults and from $5 to $10 for juniors.

2016 - President Paul Arnell. A battery operated ball machine was acquired, along with Babolat pressure-less balls for the machine. Visits with the Comox Valley Tennis Club at Springwood and in Comox were arranged.

2020 - President Ada Sarsiat. 127 adults, 2 juniors. Play resumed in the summer under a strict COVID Protocol. No Round Robins and no Tournaments.

2021 - President Greg Bach. 155 adults, 1 junior. Relaxed COVID Protocal starting in the summer. Round Robins restarted in July and Club Chammpionships in August. Windscreens were added in the gaps remaining at the Springwood Courts and some windscreens were attached in the NW corner of the Qualicum Beach courts.

For an article published in the Parksville Qualicum Beach News on Jan. 5, 2022 about the snow clearing at Springwood by ten Club members, click Dec. 30, 2021 Springwood Snow Clearing

July 2019 Visit at Springwood by the Comox Valley Tennis Club

Ladies practice on the Parksville clay courts in August 2018

Meeting on July 12, 2017 at Springwood between the Arrowsmith Tennis and Comox Valley Clubs

Awards Dinner at the French Creek Harbour Grill on August 28, 2016

Links To Other Websites

Click on any of the following links for more tennis information. 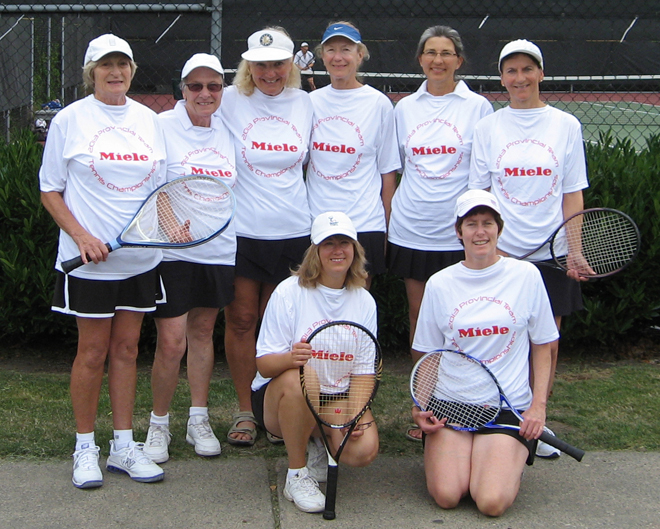